Program takes a string and calculates the number of vowels, digits and white spaces

Calculates the Number of Vowels, Digits and White Spaces Object: Write a Program takes a string and calculates the number ...
Read More Program to find a substring within a string. If found display its starting position 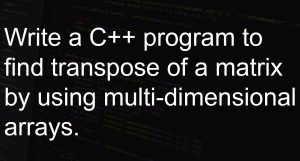 Program to find transpose of a matrix by using multi-dimensional arrays. 7 days temperature from user and print their average using array Object: Write a program that accepts temperature of 7 ...
Read More Function receives a float and an int from main ( ), and product of these two Numbers Object: :  Write ...
Read More Using function, write program that prints your name 10 times. The Function can take no arguments and should not return any value 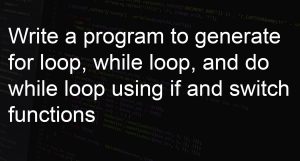 Program Generate for loop, while loop, and do while loop using if and switch functions

Generate a Loops for loop, while loop, and do while loop using if and switch functions Objects: Write a program ...
Read More